The city is subject to the urban heat island (UHI) phenomenon, which is characterized by higher temperatures in the conurbation than in the countryside. This difference is due to both the geometric characteristics and the type of surfaces, different in each environment:

The UHI phenomenon is illustrated in the following figure, taken from the "Cahiers de l'APUR" and representing the temperature difference between the centre of Paris and the surrounding rural environment.

In the context of global warming, which leads to an increase in the frequency and intensity of heat waves, it is imperative to be able to anticipate the temperature and comfort levels in the city of May.

In brief, different types of numerical models exist to predict the urban climate, from the regional to the street scale:

The experience of the design process shows that it iterative is by nature: thus many project variants need to be evaluated. It is therefore necessary to have both a sufficiently detailed model for the assessment of the impact variants on the thermal behaviour of a space, and a fast enough tool allowing for the sensitivity analysis of parameters required during the design process.

In order to meet this need to iterate, an alternative model was developed within the team, based on a decoupling of the thermal and aeraulic calculations. The idea is to make an additional use of the air velocity field originating from the CFD computations and to improve the accuracy of the calculation at a lower cost. The open softwares EnergyPlus and openFOAM are used to this end. The method developed aims at allowing an annual simulation of the phenomenon, in particular to evaluate the frequency of heatwaves over a full summer season. In terms of spatial scale, the simulation is carried out from the building to the neighbourhood. The following figure illustrates this situation as well as the time and space scales addressed by the existing tools.

The capabilities of the EnergyPlus building simulation engine are used to obtain the incident solar fluxes at the façade and the temperatures of the different surfaces according to their composition (albedo, material, thickness, glazing...). Thus, the buildings are represented by distinct "thermal zones", the low vegetation is simulated with a "green roof" model incorporating the complete water balance and the trees are assumed to be mere shading obstructions (we assume they do not emit water vapour). The following figure illustrates the principle of the model.

The integration of view factors in the radiation model was also developed using the "SurfaceProperty:SurroundingSurfaces" object in the EnergyPlus model, in order to improve the prediction.

The "numerical wind tunnel" approach described in detail "next door" is implemented in order to calculate the velocity fields at an hourly scale, in compliance with the guidelines for such modelling practices. An example of results is provided below, showing the amplitude of the air velocity at a given time on the forecourt of Strasbourg station. 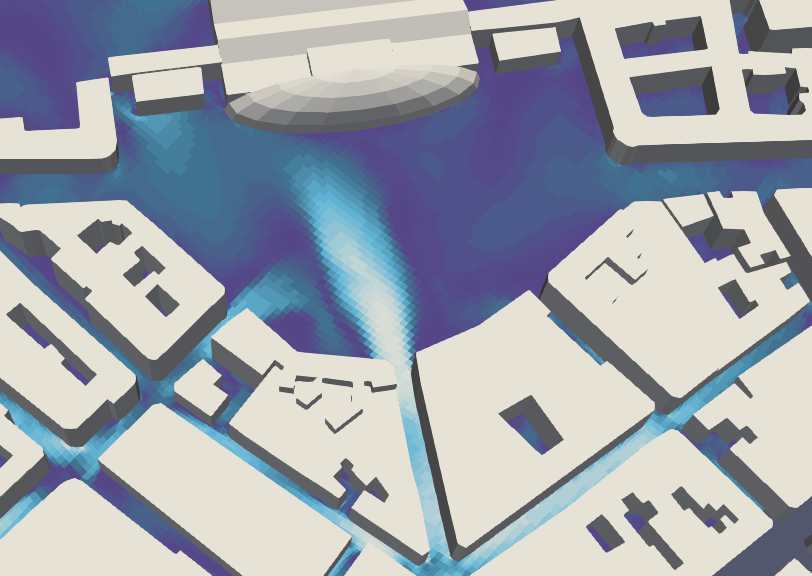 Wind velocity field at a given time on Strasbourg's station forecourt.

An interesting by-product of the airflow simulation is the local air velocity near the walls, which can be fed back to the building simulation model.

2.4 Yet another by-product: urban surroundings influence on energy consumption

Simulating the urban scene as a whole with a separation of thermal zones gives the energy consumption per building (heating, cooling, electricity) in addition to the outdoor comfort level, allowing for a holistic approach of the problem.

In order to avoid long, costly, anisothermal CFD calculations, we propose to neglect the influence of buoyancy on air movements: we assume that the air speed prevails over the temperature difference between the air and the surfaces in contact with it. In other words, natural convection is neglected.

This strong assumption is true in the presence of wind and wrong in its absence. However, this modelling approach, while not exact, considerably reduces the computational effort and, to us, appears more relevant than not doing the calculation at all.

Under this assumption, the problem reduces to a "simple" steady state heat balance for each cell of the mesh (see figure below for the 2D case), in accordance with the principle of conservation of energy.

This simplified approach allows for the resolution of both scalar temperature and humidity fields. Thus the influence of evapotranspiration on temperature and the amount of water vapour in the ambient air are taken into account.

An example of the result is shown in the figure below, showing isovolumes being 2°C higher than the air inlet temperature in the meshed volume. The increase in air temperatures can be seen in the recirculation zones behind the buildings (i.e. downstream in the present case).

3. A word on solar flux absorption by water

In the following sections, details are provided on the modelling of solar radiation absorbed by water. Indeed, the phenomenon is seldom dealt with in the educational literature, hence we thought it would be of some use to expose it here.

Solar flux is considered as totally absorbed after \sim 90 [m] in water. The fraction of remaining energy at this depth is however very small: after \sim 2 [cm], 25% of radiation is already absorbed, mainly in the infrared domain [Rabl & Nielsen 1975].

The following points can be made:

It is therefore necessary to have a model that can represent absorption as a function of depth, differentiated according to the wavelength band considered.

The coefficients \mu_i, \nu_i for each wavelength band are given in the following table.

The transmission coeffficient \tau(z) as a function of depth obtained with the previous equation is plotted on the figure below.

Note - Kaushik's formula is valid for pure water. Depending on the turbidity of the aqueous medium, the absorption can of course be more substantial.