The symbols used hereafter are explained in the nomenclature located at the bottom of this page.

Understanding air flows and overpressure in underground stations is necessary to be able to assess reliably the user comfort. As part of the work carried out on air quality in underground stations, the objective is to estimate the order of magnitude of the quantity of air which is displaced with a given train station following the arrival and departure of a train.

When a fluid is moving in a duct, part of its energy is dissipated by friction leading to a pressure drop. Two types of pressure drops exist:

Where P is the pressure, v the fluid velocity, L is the duct length, D_h is the hydraulic diameter and \lambda the pressure drop coefficient.

The total pressure loss in a pipe with a change in geometry can then be written as the sum of the two types of pressure losses aformentioned as follows:


The calculation of the piston effect in an underground station requires modelling a network of tunnels in which a train will move along a linear path and mark a certain number of stops. It is therefore a question of modelling transient 1D flows, driven by the pressure drop induced by the train motion.

The equations used to establish this simplified model are based on the principles of conservation of mass and quantity of motion (recalled here). By solving these equations, it is possible to calculate the velocity of the air put into motion by the train.

For this purpose, the generalized Bernouilli theorem is applied to a fluid control volume surrounding the train.

This yields to the following equation for the air flow in the tunnel:

C is the term corresponding to the inertia of the air column:

The state-of-the-art provides the following expressions for the different pressure losses  \Delta P  as shown in the following table:

Note: In steady-state and in the absence of a train, the equation governing the air flow can be written as:

This equation is commonly used for the study of hydraulic networks using the "Z method" but given the importance of the transient effects produced by the passage of the train, this method is not applicable in this context.

Considering that the equations governing the air flow are now established for all the tunnels of the network, they are reorganised to form the following system of equations:

To do this, we use the node and mesh methods (similar to those used in electrical engineering) illustrated below: 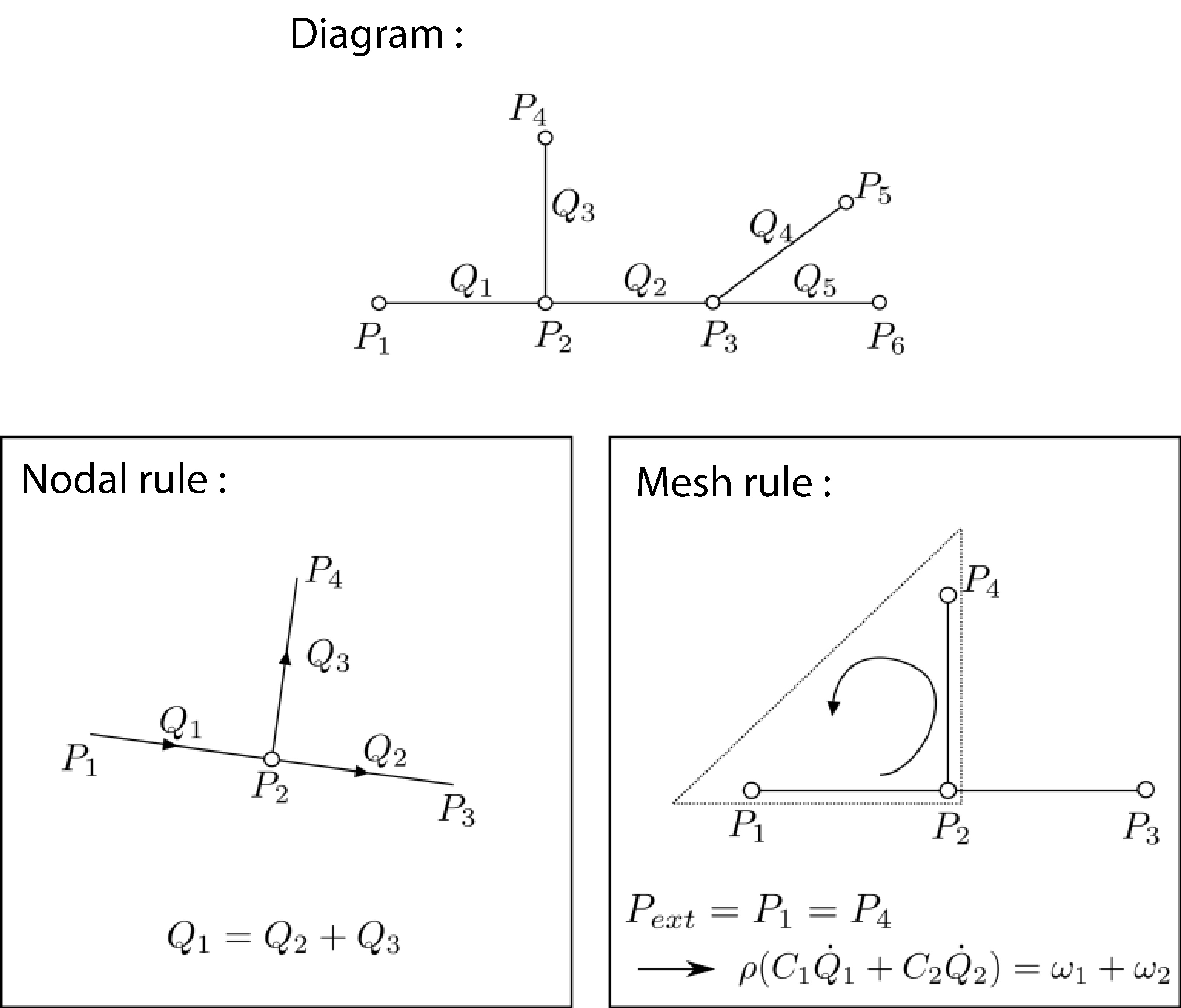 The transient system can then be solved by using a explicit resolution scheme.


A software named SPES1D (for Subway Piston Effect Simulation in 1D) was developed by our experts to solve the transient air flow caused by trains operating in tunnels and underground stations.

This software introduces three categories of segments to cover a wide range of cases:

It is then possible to determine, during the train motion, the change in velocity and pressure in each element constituting the network.

The software developed, SPES1D, was validated after comparison with Sajben's study (3). In his article, Sajben studied the piston effect of a train with a constant propulsive power. Among others, he observed a given set-up that when the train reaches 21 m/s, the air in the tunnel is moved at 8.2 m/s. The same set-up was modelled and simulated with our internal software SPES1D. Under the same operating conditions and for a train also moving at 21 m/s, the speed of the displaced air also reached 8.2 m/s.